Max Fagandini is an enthusiastic and experienced musician, with a background of both classical and jazz playing. Currently he is based in London, with a degree in Classics from UCL and a passion for music. 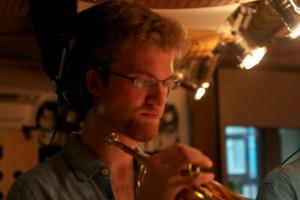 He’s played the trumpet for over 16 years, and during that time has gained a wealth of experience as a performer. He’s played with original projects, orchestras, jazz and soul bands and pit bands for shows, amongst other things, and has worked with the popular function band Down for the Count, performing for functions and events across the UK. With them he has recorded 2 albums and 2 videos.

While at Tiffin School, a performing arts college in Kingston-upon-Thames, he set up the band Funk That, an 11-piece function band playing jazz, soul, latin and pop music for various events, at the age of 16. At university, he set up another function band, The Martinis, and enjoyed regular playing opportunities with the musical societies at UCL. More recently, he’s set up the Two Rules Big Band and the Happy Hour Collective, both dedicated to bringing you excellent music. 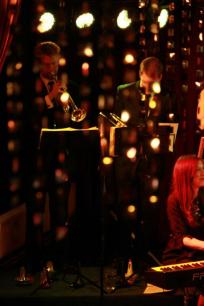 Over the years Max has also played with the Paul Jordanous Big Band, the Dan Spanner Big Band, the London Gay Big Band, the Thames Youth Orchestra, along with shows such as Guys and Dolls, West Side Story, Anything Goes, Mack and Mabel, Oklahoma!, The Rocky Horror Picture Show, The Producers, the UK premiere of The Addams Family and many more. He’s also enjoyed plenty of experience in the recording studio and playing with smaller jazz and classical groups, including the Equinox Quintet.

He’s also an experienced arranger, and regularly arranges tunes for his bands and the various groups with whom he works.

If you’re interested in booking Max or organising a band for an event through him, please head over to the Contact page.

Photos from Down for the Count

2 thoughts on “About Max”